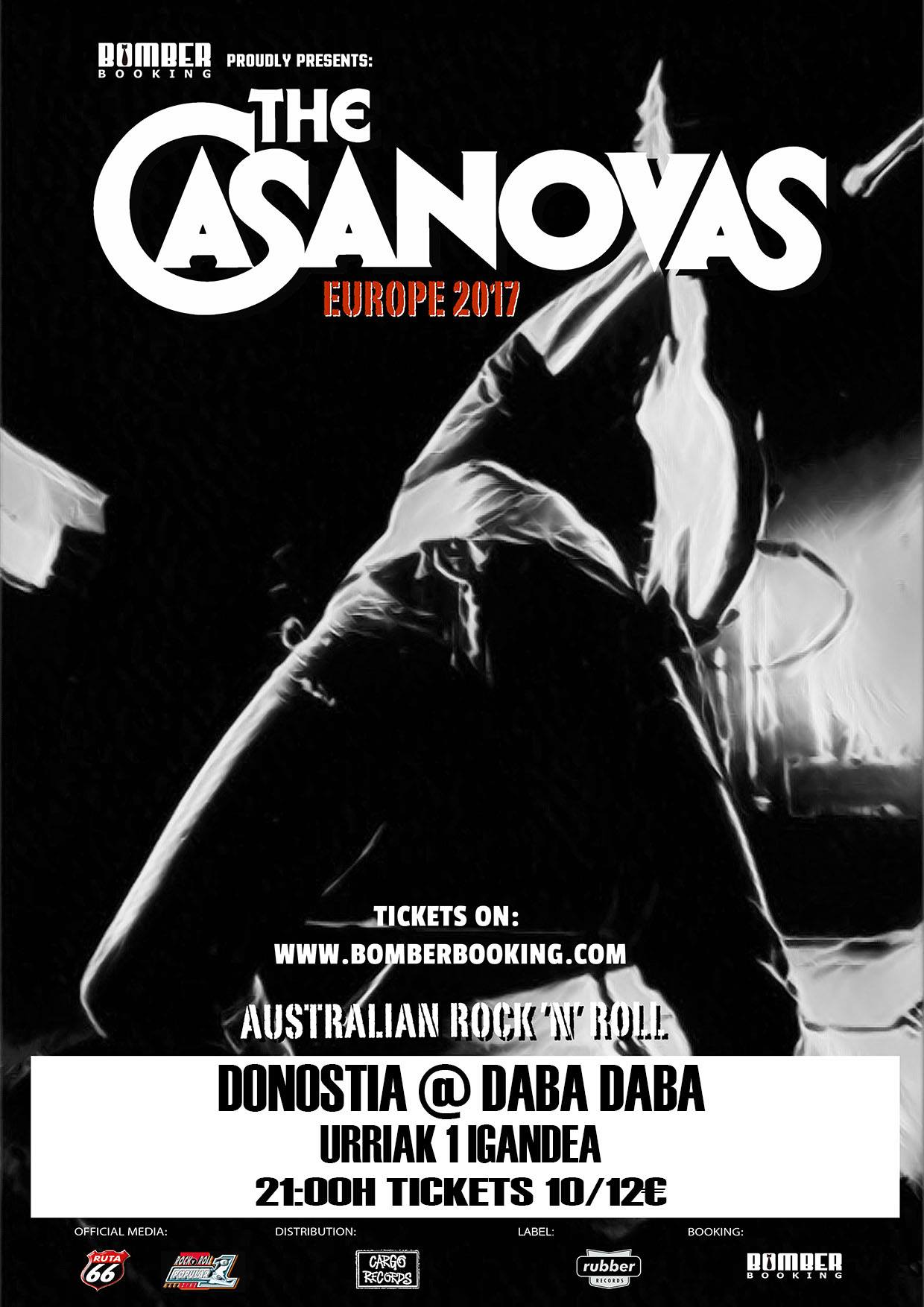 Formed in 1999 by frontman/guitarist Tommy Boyce, a passion for Stiv Bators, Paul Stanley, and everything in between, birthed stompers “Nasty”, “10 Outta 10” and “Shake It”. Nine weeks in Europe and the USA followed, completed by a stint at SXSW in Texas. Debut The Casanovas [2004] hitched them to national tours with Motorhead and The Darkness, while All Night Long [2006] paired them with The Black Crowes, Airbourne and Redd Kross.
“I formed the Casanovas in 1999 with my brother, Patrick on drums and our friend Jim Lewis on bass. After about 5 rehearsals fate would have us supporting our local heroes, the Powder Monkeys for our first show at the now called Northcote social club. We played due to other members of Jim’s other band, Red Shift, incredibly not turning up for the gig. We had about 5 songs and were really rough but it was a gig nonetheless and it got an enthusiastic enough response from the crowd for us to be spurred on and write more songs. Fast forward to a year, heaps of gigs, and a 7 inch release later, we were playing Meredith, The Big Day Out and JJJ Live At The Wireless and with a then pretty much unknown White Stripes.“

“To be honest the rest is a bit of a blur, but involved heaps of touring and the continued rise in hype for the band. We put out the ‘Keep It Hot’ EP that was followed by Jim sadly leaving the band due to work commitments. Jim shoes were filled by our current bass player and singer extraordinaire, Damo Campbell (ex Mustang). As a fitting farewell to Jim, we played the Melbourne leg of our tour supporting our NY punk heroes, ‘The Dictators’ with him on bass. For Damo it was a baptism of fire supporting The Dictators and Celibate Rifles in Sydney for his first shows with the band.“
“After touring Europe and America in early 2003 with good friends, The Datsuns, we headed back to Oz for more and more national touring before starting the recording of our first album ‘The Casanovas’. We were nominated for best breakthrough single at the Arias that year…. Our category was won by none other than Delta Goodrem! It was a rough time as the touring had pushed intra band relationships to the limits at times and sadly Patrick left the group during the recording of the first album. We were really lucky to secure punk rock pedigreed Jaws Stanley of ‘The Onyas’ on drums…. he finished what was left to do on the album and the band pushed on.“

After that it was more and more touring….. In Japan, the UK again, Spain as well as nationally with Motley Crue, Motorhead and The Darkness to name but a few. We were nominated for best live band at the 2005 Jack Awards. We recorded our 2nd album ‘All Night Long’ in northern California with producer Sylvia Massey in July 2005. Of course there was plenty more touring after that.” – Tommy Boyce.

Come 2007, familial responsibilities and Tommy’s completion of an architectural degree imposed a hiatus. All the while, the trio wrote and played intermittently. But 2013’s rapturous performance at [Powder Monkeys bassist] Tim Hemensley 10th anniversary gig spurred Boyce, bassist Damian “Damo” Campbell and drummer Jordan “Jaws” Stanley to forge album three.
“I definitely felt we needed to do another record,” says Tommy. “Something that was more representative of the band than we’d had in the past. Richer in song quality, and rawer in terms of recording and performance.”
Tracked to tape at Sing Sing Studios, South Yarra, and produced by Jimi Maroudas [The Living End, Eskimo Joe], Terra Casanova summons us into the trio’s world: one where humour, life circumstance, and albums by the MC5, Blue Oyster Cult, KISS, Cheap Trick, Free, Thin Lizzy and The Stooges are appreciated.
Opener “He’s Alive”, with its Judas Priest lash, announces The Casanovas return. Dulcet third track “Hotel Sunrise” tells of their scuzzy Sydney base used when supporting idols, The Dictators, in 2002.
Tommy’s lyrical humor prevails on the ZZ Top-galvanised, “Chicken Leg Blues”, where he laments his twig-like limbs, and attempts to procure jeans to bulk them: “I’ve been doing squats by the dozen but my chicken legs were baked in the oven.”
Boisterous “Slug” and the heavy blues of “Cold Metal” both allude to Tommy’s 2009 battle with haemochromatosis, an iron overload disorder that demanded endless blood drains, and left him enfeebled. Harmony is restored on soaring, gorgeously jangly anthem “Just Because”, inspired by an ex-love.
Retaining the core of their visceral, riff driven sound, Terra Casanova’s exploration of rock fused with pop elements, elevated by their maturity as a band, marks it their most varied release yet.
“We didn’t have something that represents us as well as this one does,” says Tommy. “It’s what we love without compromise.”
Armed with this bevy of killer new songs, The Casanovas are hankering to play live and tour again. Known for his rooster-like prowess on stage, Tommy promises a band on form.
“Does a chicken have legs?” he says. “I can’t wait to get up there and strut my stuff.”
_